Disc hernia is a condition in which the wall of the intervertebral disc becomes weaker and, due to the pressure of the body weight, is prolapsed out from its space. Since the spinal cord and the nerves move next to the discs, disc hernia might suppress them. If the disc herniation presses the nerve root, intensive pain or numbness is felt in the limbs; sometimes weakness of the muscles occurs. 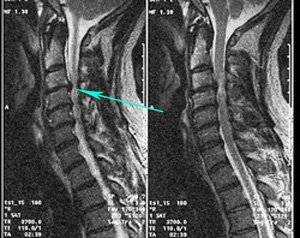 A diagnosis of disc herniation does not automatically necessitate operation because the chosen therapy depends on the size, the location or the possible multiplicity of the herniation, as well on the symptoms of the patient and his or her previous diseases. Since many patients having disc hernia are cured without operation, it is highly recommended to receive individual opinion from the specialist.